It’s time for retailers to close their front doors. Not only do open doors admit traffic noise and fumes; they also let out vast amounts of wasted energy. A new UK pressure group called Close The Door estimates the cost at hundreds of millions of pounds a year, and is gathering excellent media coverage and growing political support: there’s a private member’s bill due in Parliament at the end of this year. 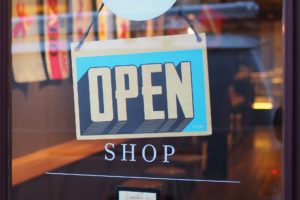 In the US, the Long Island Power Authority estimated that retailers waste 20 to 25 percent of the energy they consume by allowing air-conditioned cool air to waft out onto the sidewalk – and in some areas the proportion of shops with their doors open as a matter of policy was a high as 65 percent. According to LIPA Chairman Richard M Kessel:

“Customers should ask the stores to close their doors. What good does it do to worry about such issues as air quality, global warming and high energy prices when one is scooting in an out of stores that waste 20 to 25 percent of the electricity they use? The message from customers should be: Be Cool – Keep it Closed.”

Now New York’s Mayor Bloomberg has passed legislation banning shops from leaving their doors open while running their AC. But in the UK the practice remains common in summer and winter alike. A stroll down London’s Oxford Street reveals that the vast majority of store doors are wide open, leaking energy and admitting noise and fumes.

The Sound Agency’s Julian Treasure talks about the aural consequences of an open-door:

“I have stood in booth-like cell-phone outlets on Oxford Street wondering aghast how the people who work in there survive without therapy, and how any sensible business conversations take place at all. To add insult to injury, some of them are playing semi-audible music, presumably in the hope that this will make everything fine. It doesn’t.”

Revolving doors, on the other hand, keep the noise and energy in and require not power to operate. An extra aural (and also environmental) benefit would be getting rid of those noisy and wasteful hot air blowers that many stores use instead of air curtains.

Shops with closed doors would be quieter, calmer and much more pleasant places to be, which could well see an increase in sales.